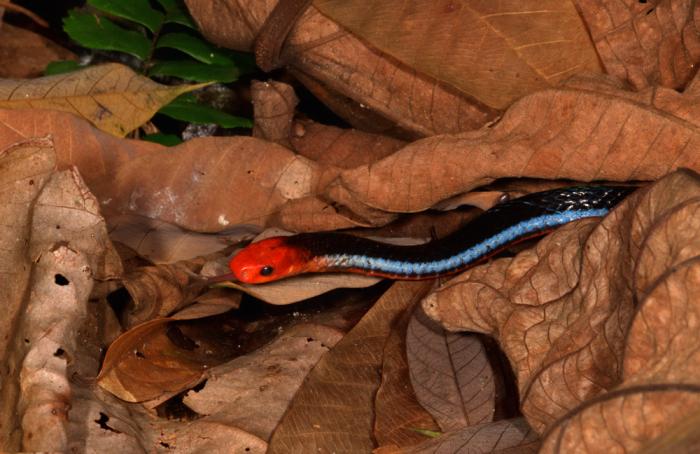 Newly discovered properties about the venom of a deadly and strikingly beautiful snake – dubbed the “killer of killers” – may lead to new pain treatments for humans. A new international study of the blue coral snake finds its unique venom paralyzes its prey in a different way to that of other paralyzing poisonous snakes. Its usefulness to pain management could lie in the way it acts on a type of sodium channel, say the researchers.
[Blue coral snake] The researchers suggest what they discovered about blue coral snake venom could lead to new pain treatments.
Image credit: Seshadri.K.S

The team – including scientists from Australia, China, Singapore, and the United States – reports the findings in the journal Toxins.

The German philosopher Friedrich Nietzsche once said, “That which does not kill us, makes us stronger.”

Whether one agrees with Nietzsche or not, it cannot be denied that his assertion serves as a useful maxim for the medical use of venom toxins. This natural source of bioactive compounds has given rise to drugs that relieve pain and treat a range of ailments, including cancer, diabetes, obesity, and heart failure.

The study of venoms shows that the toxic proteins and amino acids they contain – known as peptides – act on cell receptors and ion channels, controlling how cells behave.

The range of medical applications is vast and continues to grow. For example, a recently published study suggests that tarantula venom might be used to treat irritable bowel syndrome, while another earlier one proposed milking the venom of deadly jellyfish could lead to new medicines.

However, it was only recently that this vast and disparate knowledge was brought under one roof, when a team recently compiled an open-source library that documents nearly 43,000 effects on the human body produced by the application of venom toxins.
Venom delivers ‘massive shock’

The motive for the new study stems from a desire to better understand the fascinating evolution of venoms. These predatory and defensive weapons have evolved over millions of years and today are used by over 173,000 species in the wild.

The South-East Asian long-glanded blue coral snake Calliophis bivirgatus is unusual among snakes in that it preys on other venomous snakes that move fast and also present a significant danger to itself – such as young king cobras.

This “killer of killers” – with its electric blue stripes and neon red head and tail – is one of the world’s most beautiful snakes, and yet, despite its notoriety, the coral snake’s venom has remained largely unstudied, note the researchers.

Another striking feature is the blue coral snake’s venom glands. Possibly the biggest venom glands of any poisonous species found so far, they extend over a quarter of the length of the snake’s body.

When they investigated its properties, the researchers found that the coral snake’s venom “produces spastic paralysis, in contrast to the flaccid paralysis typically produced by neurotoxic snake venoms.”

The venom delivers a massive shock to the prey’s nervous system, triggering full body spasms by causing all nerves to fire at once.
Venom turns off sodium channels

One of the senior and corresponding authors, Bryan G. Fry, an associate professor in the School of Biological Sciences at the University of Queensland in Australia, says:

“This style of venomous predation is identical to that of a cone snail, and not like any other snake in the world.”

The cone snail’s venom induces rigid paralysis in its prey. The caught fish’s muscles tense up in a spasm like that of tetanus.

“This keeps the fish from escaping the immobile snail,” Prof. Fry explains. “Now it has been shown there is a snake that kills the same way.”

While the venom acts fast, it does not kill immediately. Instead, it instantly switches on all the nerves of the fast-moving prey – which is also a predator – rendering it frozen and immobile.

The venom does this “by preventing the nerves from turning off their sodium channels, keeping the nerve firing continuously,” says Prof. Fry.

The team concludes that the coral snake’s venom toxin demonstrates a “remarkable case of functional convergence between invertebrate and vertebrate venom systems in response to similar selection pressures.”

They note that the discovery also “reinforces the value of using evolution as a roadmap for biodiscovery.”

“This venom hits a particular type of sodium channel that is important for the treatment of pain in humans. This is another in the long line of useful discoveries from venom that could benefit human health.”

By continuing to use the site, you agree to the use of cookies. more information